Select the community to which you would like to donate:

During the 1918 flu pandemic, religious sisters stepped up to help 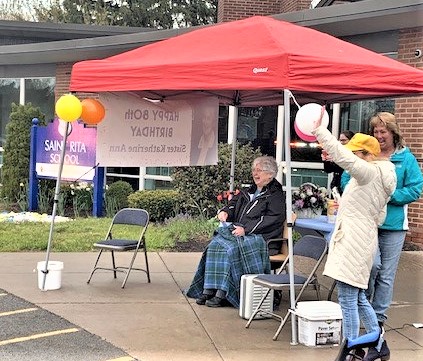 The wail of sirens from three fire trucks and four police cars and tooting of horns led a parade, by one estimate, of

“I just couldn’t believe it. I am still shocked!” said Katherine Ann – principal at St. Rita School in Webster, N.Y., from 1983-2013 – in a telephone interview a few days after the organized parade by former school parents, teachers and secretaries.

Katherine Ann, who still lives near the school, was taken by organizers to a tent along a traffic circle in front of the Pre-K-6 school on Maple Drive. She was led to a front-and-center chair and given a lap blanket when she heard the sirens and horns of approaching emergency vehicles followed by cars filled with well-wishers. Many had festive balloons and signs.

“There were so many people that I haven’t seen in years,” she said, admitting she became emotional at times. “I just wanted to hug them and talk to them to see how they were doing; but I couldn’t.”

Sister Miriam Nugent was among the paraders.

“It was a wonderful tribute to her. She is very loved by all,” she said. 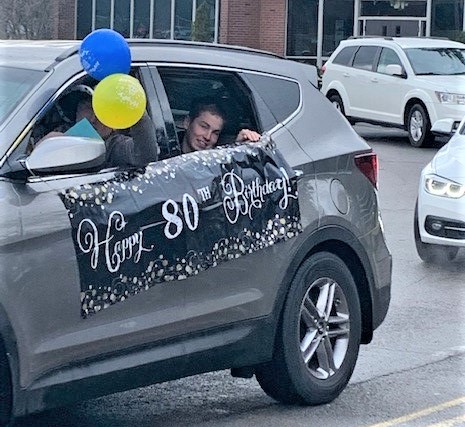 The parade also included students, Sisters of Mercy and Sisters of St. Joseph, St. Rita’s pastor and parish staff. P.J. Ryan, the first student registered at St. Rita’s when it opened in 1955 came to know Katherine Ann through alumni events and drove by her reviewing stand to offer his best wishes.

Now co-director of Mercy Bridges, she said she marveled that some of the well-wishers whom she last remembered as children running around St. Rita’s were now driving cars.

She noted that some taxpayers in Webster might complain that first responders were part of the parade, but her worries came to naught when she saw the township supervisor among those in the motorcade.

Pausing for a moment as she thought back to the special day, she said, “It was just so great!”

Back to All News

Mothers & Others Provide Masks in Nebraska